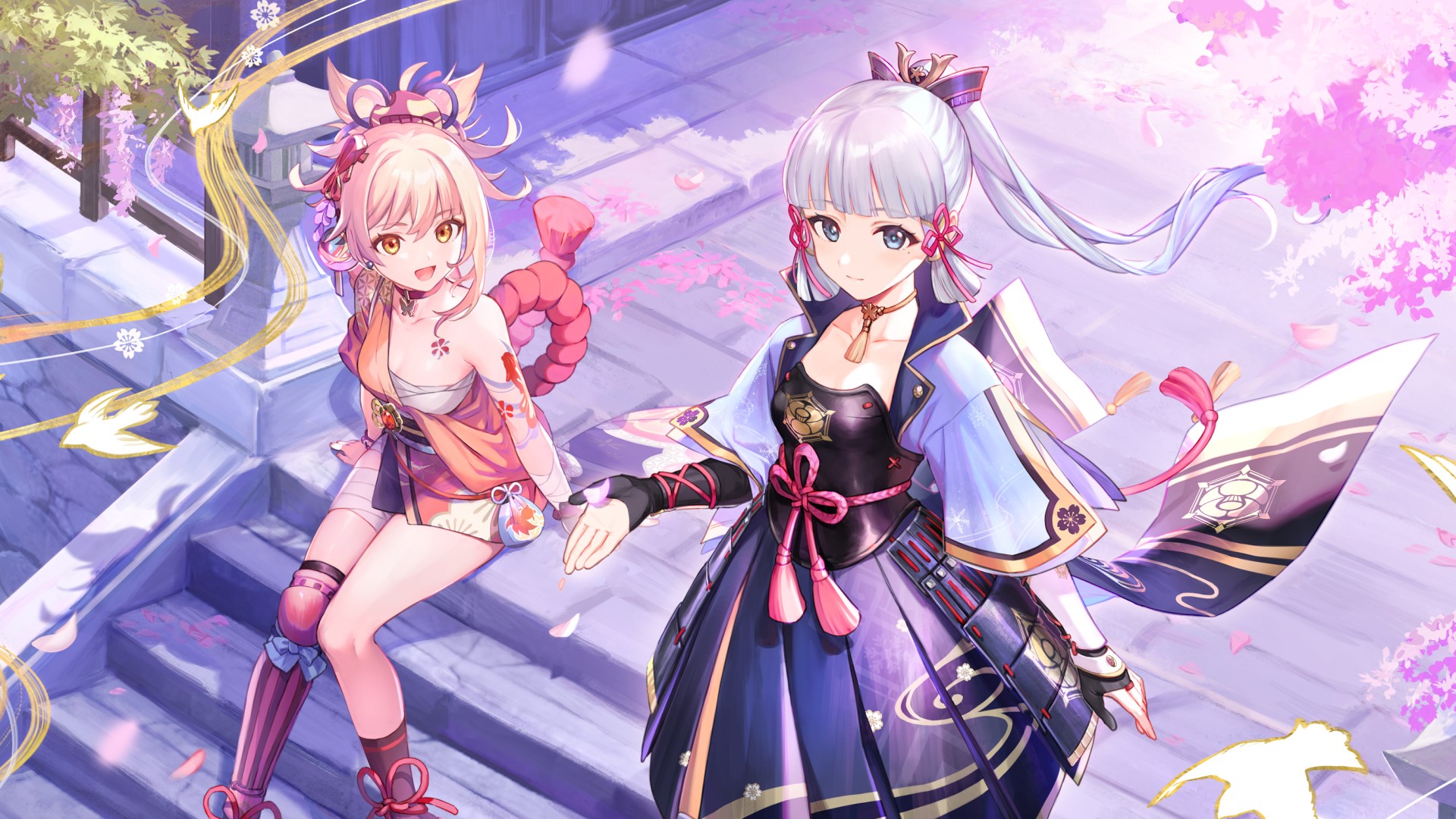 Now that version 2.0 has finally launched, there are well and truly more Genshin Impact characters than you could ever hope to build, and even more are on the way. The Ayaka banner has started, but we’ve also got Pyro archer, Yoimiya, and the napping ninja, Sayu, arriving in early August. On top of that there’s an upcoming crossover character in the form of five-star Cryo archer Aloy from Horizon Zero Dawn, and that’s not even mentioning the Raiden Shogun, Sara, and Kokomi looking to arrive in version 2.1.

With so many new Genshin Impact characters, tier lists are more important than ever. With the right Constellations, Elemental Resonance, as well as weapons and artifacts, any character in the game is viable. But if you’re just starting out and don’t want to shell out money every time a new banner drops, it’s useful to know the the general strength, utility, and rarity of characters when you’re building a team.  Every Genshin Impact character can be powerful if you build them right, but chances are you’re never going to have every character.

Ganyu
This Cryo archer is not only one the best DPS characters for that element, but one of the best damage dealers in Genshin. She provides consistent Cryo AoE damage with Trail of the Qilin and Celestial Shower, as well as increased crit rate from her passive, Undivided Heart.

Hu Tao
Wansheng’s polearm-wielding Funeral Director, Hu Tao, hits like a truck on fire. Not only does she deal massive Pyro damage with her Elemental Skill and passive, but her burst, Spirit Soother, inflicts AoE Pyro damage and heals her when it hits.

Venti
This tone-deaf bard is one of the most powerful Anemo character in-game, using his Elemental Burst to summon an AoE damage hurricane that sucks in enemies and absorbs other elements to trigger Swirl. This makes Venti a versatile support for most damage-dealing characters. Also he levitates, which is cool.

Bennett
A happy-go-lucky adventurer with an unlucky past, Bennett is a fantastic four-star support character, using his Elemental Burst for healing, a decent attack buff, and Pyro infusion after unlocking Constellation 6. He is especially well paired with Pyro DPS characters like Diluc or Klee due to that 25% attack boost from Elemental Resonance.

A noble yet lonely princess of the Kamisato clan, Ayaka’s power lies in her ability to move quickly between opponents using Senho sprint, freezing them, and dealing massive Cryo damage. She is especially well paired with Xingqui for constant Freeze reactions. If you’re struggling to find her character ascension matierial, be sure to see this Sakura Bloom locations guide.

Xingqiu
Another excellent support character, this bookish four-star swordsman summons damage-reducing swords that heal, and his Elemental Burst follows up attacks with rain swords that inflict Hydro damage. He pairs well with Electro or Pyro damage dealers, allowing for plenty of Vaporize and Electro-Charged reactions.

Zhongli
As a Geo character, Zhongli is a bit of a rock. His fortifying shields are the best in the game and he gains increased damage based on max HP. His Stone Steles also resonate with other Geo constructs causing damage. A good pairing for Ningguang’s Jade Screen ability, or Albedo’s Solar Isotoma for protection and Geo damage.

Albedo
This Alchemist’s strength lies in his Elemental Skill: Solar Isotoma. This ability provides a consistent source of AoE Geo damage, a fast cooldown, and produces elemental particles to fuel other abilities. It also creates a raised platform that your characters can use for plunge attacks, or to rain destruction from—no wonder Klee likes him so much.

Kazuha
As with many Anemo characters, Kazuha is at his best when built towards Elemental Mastery support, strengthening and facilitating Elemental Absorption and Swirl. His only real drawback is that Sucrose, a less rare Anemo character, can already do this extremely well.

Klee
Imagine Little Red Riding Hood with WMDs and you won’t be far off. Klee is one of the best Pyro DPS characters in Genshin due to the high AoE damage her attacks inflict. Her Elemental Burst, Sparks ‘n’ Splash is similar to Xingqiu’s except inflicting Pyro damage, so much so that if you pair them you can trigger almost continuous Vaporize.

Jean
Since Jean’s healing is based on her attack stat, she’s a strong support and sub-DPS rolled into one. Dandelion Field provides a powerful AoE healing burst, while her passive, Wind Companion, keeps your party topped off, as every time Jean attacks there’s a 50% chance everyone gets a heal.

Diluc
While Diluc has been somewhat overshadowed by new characters, he’s still one of the best DPS heroes due to his ability to frequently inflict Pyro damage and infuse his claymore with the element. Most of all, Diluc is a straightforward and easy damage-dealer to use.

Yanfei
Known, perhaps unfairly, as a discount Klee, Yanfei can’t match the little red bomber for damage, but she can offer a consistent source of ranged Pyro to pop off those Elemental Reactions. Pair her with Xingqiu’s burst to Vaporize anything.

Mona
This astrologer is a consistent source of Hydro damage, making her useful for hammering Elemental Reactions. Her Mirror Reflection of Doom skill is great at kiting, and her burst, Stellaris Phantasm, is similar to many Anemo abilities in that it allows you to trap and punish enemies. Also she can sprint on water by becoming water.

Tartaglia
This hybrid bow-and-polearm character is a versatile damage-dealer. Foul Legacy: Raging Tide allows him to switch weapons and his Elemental Burst, Havoc: Obliteration, is a strong Hydro AoE that changes depending on weapon stance. His only real drawback is the lengthy cooldown for switching between stances.

Xiao
One of the best Anemo damage-dealers, not only does Xiao have a cool mask, but his burst is especially powerful. It boosts his jumping ability and lets him spam AoE plunging attacks like a demon pogo stick.

Diona
This feline barmaid and archer is a great support character. She uses her Icy Paws skill to provide shields with high Cryo resistance, and her Signature Mix burst for gradual healing and AoE damage.

Keqing
Alongside Razor, Keqing is one of the best Electro damage-dealers in Genshin. Her fast attack pattern and Stellar Restoration skill allow her to move quickly between opponents, but also infuse her blade with Electro for Elemental Reactions.

Sucrose
Since her passives boost Elemental Mastery, Sucrose is a good Anemo support character for facilitating and strengthening Elemental Reactions. Her burst, Forbidden Creation – Isomer 75 / Type II is good at absorbing other elements and causing Swirl.

As a Geo spellcaster, Ningguang constantly creates elemental shields through the Crystalize reaction. Her Jade Screen skill is also very useful, blocking enemy projectiles while allowing your characters to continue to fire through it.

Razor
This wolf boy is Genshin’s go-to Electro damage-dealer due in equal parts to his high Physical damage and his ease of use and playstyle. Also because he’s a four star, you’re far more likely to pull him than you are Keqing.

Fischl
Alongside Oz, her pet raven, Fischl is a very good source of almost constant ranged Electro damage. Like Xiangling’s Guoba, Oz keeps firing even if you switch characters, meaning you can hammer those Elemental Reactions.

Noelle
Alongside Zhongli, this four-star maiden knight is Genshin’s go-to Geo tank. This is because Noelle’s Elemental Skill, Breastplate, provides a healing shield that scales from her defense, and she can gain elemental shields through the Crystalize reaction.

Barbara
Mondstadt’s first and only idol is a great healer, but she lacks the extra utility and damage of Jean and Bennett. Still, she’s very good for a character that Genshin gives you for free after the ‘Song of the Dragon and Freedom’ quest.

Beidou
Though a solid Electro damage-dealer, this pirate captain is generally considered less preferable to Razor due to her primarily defensive Elemental Skill. However, her burst is very powerful, and she does make her a decent tanky sub-DPS.

Chongyun
Chongyun is a great Cryo DPS when paired with characters like Bennett and Xingqui for Melt, Freeze, and Shatter reactions, but can be somewhat overshadowed by Genshin’s other amazing Cryo characters.

Kaeya
As a free character you get for completing early story quests, Kaeya will most likely be your source of early game Cryo. But it’s hard to recommend investing in him when there are so many stronger Cryo characters (unless you think he’s hot, that is).

Rosaria
As you might imagine for a killer nun, Rosaria is all about fast and deadly strikes, buffing crit rate with her passives and attack speed with Constellation 1. She is well paired to further increase the effectiveness of a high damage character like Diluc.

Qiqi
This zombie herbalist is an incredible healer, and as her talisman-based healing scales on damage, like Jean she can be an effective sub-DPS. This healing can often feel excessive, though, and as a four-star Cryo support, Diona is often preferable in both versatility and rarity.

Xiangling
Though this polearm-wielding chef isn’t as strong as some DPS characters, her Pyronado and Guoba Attack abilities form a fantastic Pyro toolkit for enabling Elemental Reactions.

Xinyan
As a four-star Pyro character, Xinyan is easier to pull than Diluc, but she’s actually better as Physical DPS support than her original role of damage-dealer. Her passive ‘… Now That’s Rock ‘N’ Roll’ increases Physical damage by 15% for characters protected by her shield skill.

Lisa
Though a good source of Electro and useful in some party combos, Lisa’s Elemental Skill doesn’t stick around after she’s switched, making her less effective than other four-stars like Fischl. At least she’s free.

Traveler (Anemo and Geo)
The Traveller is a decent early game character and is relatively strong, but they’re outperformed by Genshin’s other five-stars in terms of both Anemo and Geo. Genshin is a game about trying new characters, so it’s not surprising the first character we get is one of the least-used.

The latest new Genshin Impact character is Ayaka, a five-star Cryo sword-wielder you can currently wish for using the Heron’s Court banner. Though maybe not as powerful as Ganyu, she’s a very strong Cryo DPS, with plenty of skills that deal Cryo AoE damage, and some extremely powerful constellation effects. Her constellation 6, Dance of Suigetsu, provides a buff that increases her charged attack damage by 298%, and that’s just a bit crazy.

But most notable is her Senho sprint. She’s the first character since Mona to get an alternate sprint, and when you combine it with her ability to quickly apply Cryo and combo freeze enemies, it creates a really enjoyable playstyle, as you dash between opponents, freezing and isolating them. It  makes me wish that more weapon-wielding characters had alternate sprints, but it also gets me excited to see Sayu’s movement-based elemental skill in action.

How to get Genshin Impact characters

To get Genshin Impact characters, you have to use the game’s gacha system to ‘Wish’ on a banner. You use Genshin Impact Primogems to purchase Intertwined Fate or Acquaint Fate that amount to a single wish and can be used individually or in sets of ten for a guaranteed four star hero.

Different banners feature different characters and boosted pull rates, so if you want a specific character and don’t want to spend money, it’s better to save up your Primogems and wait for them to be featured. The Genshin Impact pity and soft pity systems are also important to understand:

If you pull someone you already have, they are converted into an item that lets you unlock a Constellation upgrade for your current version of the character. Genshin Impact also gives you five free characters: