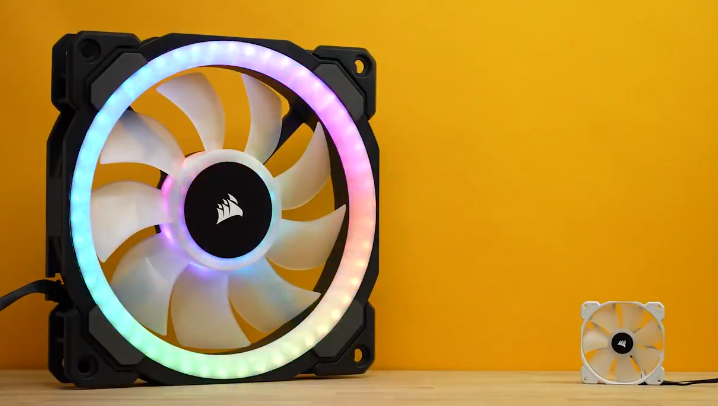 Corsair and its community are currently celebrating Fan Week. It’s kind of like shark week, but instead of celebrating sharks, it’s celebrating, you know, cooling fans—one of the most underappreciated pieces of PC gaming hardware that live in your PC.

Introducing the latest in Fan technology, the highest performing Corsair Fan we will ever make: The Corsair LL 500mm RGB#CorsairFanWeek pic.twitter.com/t7DCgMMvVIAugust 24, 2021

During Fan Week, Corsair invites its community to showcase all the best fan-related content and memes they can offer. In turn, the hardware company released a convincing video on their Twitter and Tiktok account ‘announcing’ the Corsair LL 500mm RGB cooling fan. Which begs the question, why have a bunch of tiny fans when you could have just one enormous one?

iCUE SP140 RGB Pro Performance fans got hit by a reverse-shrink ray. Currently, I can’t think of any PC case that could even accommodate something this big.

Considering how hot my workspace has been in recent days, I could be convinced to drop an irresponsible amount of money for a light-up box fan to keep me cool and annoy my wife, who hates all things RGB. A part of me would love to see what sort of colossal gaming PC a modder with a big enough case could dream up if Corsair ever were to sell these bad boys.  There’s nothing cooler than seeing huge versions of things that are supposed to be small.

Because we live in a time where even memes turn into actual products (I’m looking at you, Xbox Mini Fridge), I did reach out to Corsair about the 500mm fan, and it confirmed that the LL 500mm RGB fan is, in fact, just a joke. And that bums me out. Though, at this point, I wouldn’t rule it out.

If we are talking about joke products we were wish were real things, Razer still takes the cake with things like the floating gaming mouse and robot assistant who’s kind of a jerk. I am also still holding out hope for Logitech’s racing wheels for dogs.