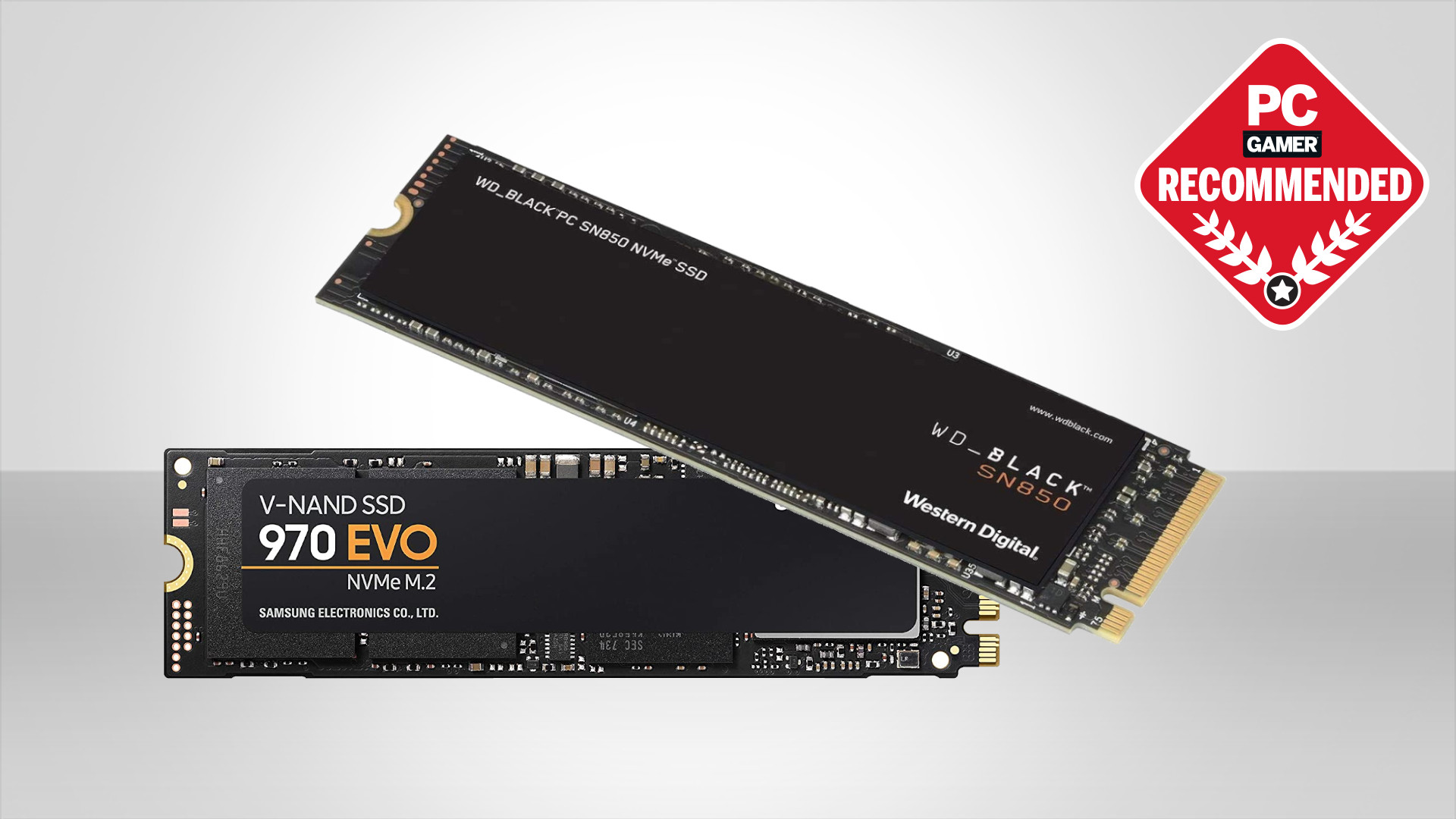 The best NVMe SSD will give you access to a whole world of lightning fast storage. Going from SATA to NVMe is like making the jump from an old hard drive to the first-gen SSDs. In short, it just makes your whole gaming PC feel more responsive. It’s that simple. Your games load quicker, Windows is that much snappier, and copying files around is no longer a chore. Honestly, it’s one of the best upgrades you can make to your system, especially as getting yourself a new graphics card is pretty much out of the question right now.

Upgrading to one of the best NVMe SSDs will also bring your machine bang up to date with the latest consoles. And even surpass them. Both the Xbox Series X and PlayStation 5 boast speedy NVMe SSDs, and the technology that makes the most of their storage, called DirectStorage on our PCs, will be finding its way to our system soon. Essentially, storage is about to get a lot more important for gaming PCs.

WD_Black SN850 1TB | 7,000MB/s read | 5,300MB/s write
The 1TB version that would be our pick from the SN850 range. The 500GB drive lacks the full punchy pace that is the signature of 1TB PCIe 4.0 SSDs, and is pricier than most similarly capacious PCIe 3.0 drives, but the 1TB SN850 has a decent sticker price and stellar speed. And is just about the best you can buy today.View Deal

Western Digital has released some quality drives lately, with the SN750 being a mainstay of our best SSD for gaming guide and the likes of the SN550 offering incredible value for money. With the release of the SN850, Western Digital gets to add another trophy to its cabinet—the fastest PCIe SSD around. Thanks to the latest generation of PCIe interface, you will not find a faster, more reliable NVMe drive today.

The Phison E18-powered Sabrent Rocket 4 Plus has higher quoted sequential read and write figures. And while it’s true that the SN850 trails slightly in some of the synthetic benchmarks, we put more weight on the real-world tests, and here the SN850 is head and shoulders above anything else in this group test. It’s the fastest at the FFXIV game load and PCMark10’s full storage test, and it isn’t exactly sluggish in straight throughput either—managing 5,920MB/s reads and 5,021MB/s writes in AS SSD.

It shouldn’t come as much of a shock to discover that this incredible performance comes at a cost, and this drive is definitely at the pricier end of the spectrum, working out at $0.23/GB. It’s also a toasty drive, hitting 77°C in operation. This shouldn’t be a problem in a well-ventilated case but maybe an issue in a more cramped system. Still, if you want the fastest drive around, this is it.

A great NVMe SSD at an attractive price

WD_Black SN750 500GB | 3,430MB/s read | 3,000MB/s
You don’t have to spend a fortune to get serious SSD performance. The half terabyte SN750 is still a mighty fast drive, and with 1TB of storage capacity it will happily contain your Windows installation as well as your most oft-played games. View Deal

Western Digital has been a stalwart in the platter HDD world for many long years now. Its foray into the SSD market has shown an inherent competency in providing sensible, consumer-friendly storage. The new SN850 shows just how far that competency has extended into the latest generation of PCIe interface. Though it’s not without its faults, this M.2 form factor NVMe drive is a speed demon, made faster by a Gaming Mode you can toggle on or off in the company’s integrated SSD Dashboard software.

Of course, kicking it into overdrive also means cranking up the heat, which, according to Western Digital, necessitates the use of a thermal heatsink. Sold separately, the heatsink model comes at something of a premium, but the company claims its “passive cooling features” aid with ushering in “optimal levels of performance.”

In regular use, it’s practically as fast as the 970 Evo Plus. For the most intense workloads, Samsung wins out, but gamers aren’t likely to fall into that user category. Several other drives use the same SM2262EN controller, which often means similar performance (e.g., the Mushkin Pilot-E).

A speedy PCIe 4.0 SSD that will last and last

Seagate Firecuda 530 2TB | 7,300 MB/s read | 6,900 MB/s write
The 2TB version is the version to go for; it gives you the highest straight performance and an astounding endurance level. The version with the gorgeous EKWB heatsink is a little more expensive, but if you don’t have integrated SSD cooling on your motherboard it’s worth going for.View Deal

Of course Western Digital and Samsung are the big names in storage, and most especially in the world of SSDs. Seagate may have taken a while to get into the solid state game, and especially the PCIe 4.0 market, but it has arrived with a bang with the Firecuda 530. With or without the heatsink (something that’s necessary for its PlayStation 5 compatibility) the latest Seagate drive is a stunner.

Of course the rated sequential read/write speeds are fantastic, but it’s the endurance levels that really stand out compared to the competition. The 2TB drive we tested has an unprecedented 2,550 TBW rating when it comes to endurance, which is something you won’t see this side of an SSD made for Chia mining.

It combines brand-new Micron 176-Layer TLC NAND—the same memory Crucial is using to great effect with the new P5 Plus drives—with a Phison PS5018-E18 controller. Micron claims that its 176L TLC NAND is the best in the industry with a 30% smaller die size and a 35% improvement in read and write latency over its previous generation 96L NAND.

And in terms of performance the FireCuda 530 either matches or beats the big bois of the storage world, and when you add its leading sequential performance and endurance rating, the Seagate 530 is at least the equal of any consumer SSD on the market.

The best value second-gen PCIe 4.0 SSD you can buy

The most affordable PCIe 4.0 drive around

Crucial P5 Plus | 6,600MB/s read | 5,000MB/s write
The 1TB version of the P5 Plus will deliver impressively high sequential read/write numbers, especially if you’re coming from a straight PCIe 3.0 SSD. And more or less for the same price. Even if you’re currently not running a PCIe 4.0 compatible motherboard, this drive will drop in for a great price and deliver high performance out of the box.View Deal

Though NVMe SSD pricing has dropped, high capacity SATA drives can be a great place to store your ever-growing Steam library. The best SSD for your gaming PC may still be an affordable, high-capacity SATA drive right now.

Crucial is one of the big names in affordable solid state storage, but has been notably slow at getting us a new PCIe 4.0 SSD. It’s been worth the wait, however, as the new P5 Plus is a fantastic entry-level Gen4 SSD. It may not have the peak speeds of the WD or Sabrent competition, but it can make a big splash in terms of those all-important price/performance metrics.

And, also importantly, it can easily outperform any PCIe 3.0 drive you can to mention, and for practically the same price. Even if you’re not running a motherboard with a PCIe 4.0 interface this will still work in an older PCIe 3.0 setup, and at the limits of that connection.

Since the first Gen4 SSDs launched there has been a quite significant price premium as a barrier to entry, and with the P5 Plus that has come down a hell of a lot. Using parent company, Micron’s latest NAND flash memory, and it’s own in-house controller, Crucial has been able to keep costs down and performance up.

In the rarefied air of PCIe 4.0 speeds it’s maybe a little lacklustre in peak and random performance, but it’s rocking TLC memory, not QLC, is still pretty damned quick compared to older drives, and is fantastically affordable.

How do we test NVMe SSDs?

What’s so special about NVMe?

NVMe drives are becoming increasingly commonplace, and prices continue to drop. In the past year, I’ve tested far more NVMe drives than SATA drives, mainly because SATA drives are all starting to look the same. Most hit the same ~550MB/s limit of the SATA interface for sequential IO, though random IO can still be a bit problematic on some models. With budget NVMe prices now matching SATA drives, most new builds should seriously consider whether the extra power and data cables of SATA are necessary.